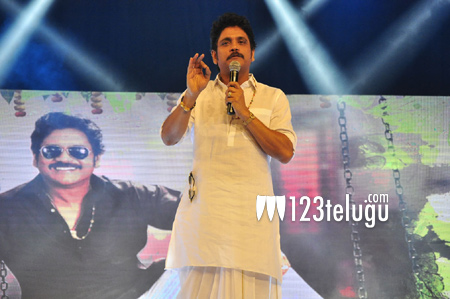 Akkineni Nagarjuna’s wholesome family entertainer, Soggade Chinni Nayana, is all set for a grand theatrical release on the 15th of January on the occasion of Sankranthi. The film’s audio, composed by Anup Rubens, was launched in a glittering traditional style last night, and speaking on the occasion, Nag exuded full confidence about the film’s success.

“Ee Sankranthi ki vasthunnam… Kodutunnam,” said a highly confident Nagarjuna to a rousing response from his elated fans. Soggade Chinni Nayana will have a tough competition from the Nandamuri heroes’ Balakrishna’s Dictator and NTR’s Nannaku Prematho, which are releasing on the 13th and 14th January respectively.