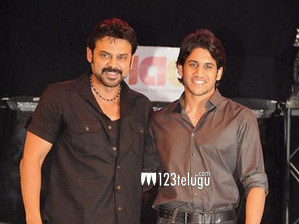 Naga Chaitanya might have finally found his comfort zone, thanks to the success of Tadakha. He’s at ease with himself and the choices he has been making of late, but the seven film old actor still makes it a point to state that he’s quite shy and an introvert in real life.

In a recent interview he revealed, “I spent 18 years of my life in Chennai and I was totally cut off from film industry here in Hyderabad. It was only after I turned 19 that I began thinking about acting in films. I spent a lot of time with my uncle Venkatesh while I was in Chennai and he has been a huge source of inspiration for me. Like him, I am quite shy and don’t like to be in limelight. He’s very close to his family and that’s something which has made a big impression on me. I’m a bit like him in several things.”

After Tadakha, Naga Chaitanya will be seen in Deva Katta’s Autonagar Surya and the Akkineni multi-starrer film Manam will go on floors in June. After that, he’s work on remakes of Hello Brother and another Kannada film titled Charminar.