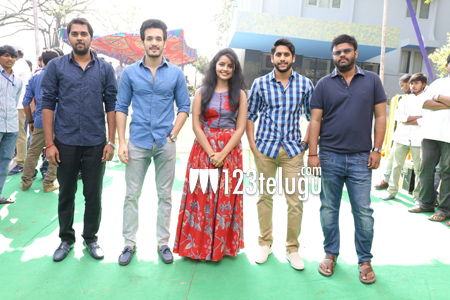 The team of Chandoo Mondeti’s new film got together at Ramanaidu Studios in Hyderabad on Saturday to celebrate the muhurat of their forthcoming film, starring Naga Chaitanya. Actor Akhil Akkineni and Suresh Babu graced the event. The event kick-started with Akkineni Akhil sounding the clapboard for the first shot.

Speaking about the event, Naga Chaitanya commented, “I liked Karthikeya and I wanted to do a film with Chandu immediately. We were discussing stories and at that time we saw this Malayalam film and I liked it a lot. We then decided to remake it here.”

He also added that he liked the aspect of love in various stages of a person’s life, “Love at school, college and also at a matured age is shown in a different way in this film. The protagonist is interesting and the story is told through him. Everyone will connect with the character and Chandu has worked very hard to adapt the film to our Telugu nativity”

The film stars Shruthi Hassan and Anupama Parameswaran as the female leads. It will go on floors from December 3rd in Vishakapatnam. The music will be composed by Gopisundar and Rajesh Murugeshan. The film is being presented by PDV Prasad and produced by Suryadevara Naga Vamsi.