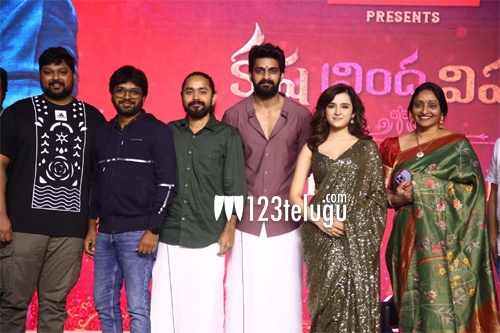 Naga Shaurya is a talented actor in the Telugu industry who had some good hits. He is now coming with the film Krishna Vrindha Vihari, a rom-com which releases this Friday. The pre-release event was held today in Hyderabad.

Speaking on the occasion, Naga Shaurya said that it has taken two and half years to make this film. Naga Shaurya spoke highly about his production banner Ira Creations and thanked his parents who stood by him always.

Naga Shaurya said that he changed a lot due to the director Aneesh Krishna and thanked him for giving him a good film. The actor extended his thanks to Mahati Swara Sagar who knows him in and out. Shirley is a good singer and actress, said the actor.

The actor said that he wouldn’t have done the film without Radhika Sarathkumar and thanked her. Shaurya also thanked all the technicians and actors who have been part of the film. Shaurya also expressed his gratitude to Anil Ravipudi who has been constantly supporting the film throughout.

The actor once again said that he is completely confident in the film. The actor emotionally said that he worked very hard to earn this current position and said that he is lucky enough to be part of the film industry. Shaurya ended his speech by appreciating anchor Suma who has associated with every film event.