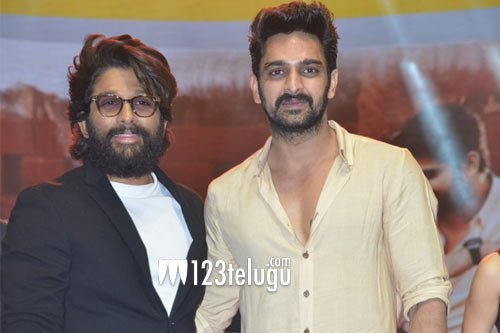 The pre-release event of Naga Shaurya and Ritu Varma’s much-talked-about romantic entertainer, Varudu Kavalenu, was held in style tonight. Speaking at the event, Naga Shaurya revealed an unknown 12-year-old connection between him and the event’s chief guest, Allu Arjun.

Shaurya revealed that when he first came to the film industry in 2009, he went to Bunny Shed, the place where Allu Arjun used to practice dance, to learn dance. “I don’t know if Bunny anna remembers this, he was rehearsing his dance moves for Varudu’s song. What surprised me was Bunny anna’s dedication. He was sweating and dancing with one hand because his other hand was injured and tied with a bandage,” revealed Shaurya.

Talking about the event’s special guest, director Trivikram, Shaurya said that is quite easy to hurt someone, but Trivikram has been making Telugu audiences laugh for the last 20 years and it’s not a mean feat.

Shaurya went on to thank his co-stars Ritu Varma and Nadhiya, director Lakshmi Sowjanya, music composers Vishal and Thaman, editor Naveen Nooli, cinematographer Vamsi, producers Naga Vamsi and Chinnababu and all others for a memorable experience with Varudu Kavalenu. The film releases on October 29.