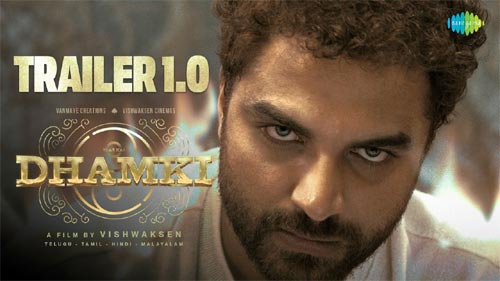 Young actor Vishwak Sen has provided his fans with back-to-back treats. Yesterday, the intense first-look poster of the actor was released, which hit a chord with the audience. Today, Nata Simham Nandamuri Balakrishna unveiled the Telugu trailer of the Pan India movie.

The trailer gives a hint about how the film will be. Accordingly, Vishwak Sen plays a dual role as a rich guy who owns an industry having a turnover of 10K crores and as a waiter. After the rich guy dies, his company and family are at risk. The guy who plays the waiter is assigned the responsibility of the rich guy’s family and company. Did the rich guy really die? Who is planning to bring down the company and family of rich Vishwak?

Vishwak Sen shows the fun side through the waiter character who fakes his identity to win the love of Nivetha Pethuraj. The actor looks very intense as the rich. The variation shown by him between both roles is good. Commercial ingredients back the interesting storyline. This Vishwak Sen’s directorial has all the elements like humor, romance, nation, thrills, emotions, action, and drama, and the trailer created high expectations.

Rao Ramesh, Rohini, Hyper Aadi, and Rangasthalam Mahesh are also part of the movie. Produced by Karate Raju under the banners of Vanmaye Creations and Vishwaksen Cinemas, the production values are neat. Leon James scores the music, and the film will hit the screens in February 2023.