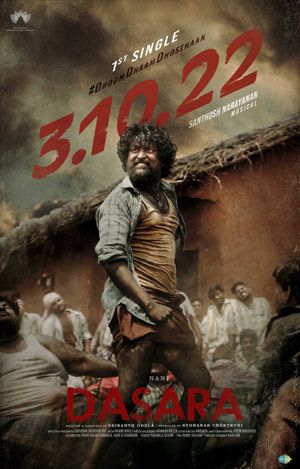 Natural Star Nani was last seen in Ante Sundaraniki, which performed decently at the ticket windows. The actor’s next release is Dasara, directed by Srikanth Odela. Recently the makers gave an update on the first single.

Titled Dhoom Dhaam Dosthaan, the song will be coming out tomorrow. Meanwhile, Nani took to his Twitter profile today and leaked the song’s promo. He wrote that he leaked this bit since the director said no to the promo. Nani’s incredible dance moves and wild looks in this promo ensure a perfect mass number ahead. Moreover, this surprise video made fans quite happy.

Keerthy Suresh is the leading lady, and it is produced by Sudhakar Cherukuri of Sri Lakshmi Venkateswara Creations. Sai Kumar, Samuthirakani, and Zarina Wahab are in for key roles in this movie. The film releases on March 30, 2023, in major Indian languages.

Since @odela_srikanth says no promo. Leaking something I recorded in my phone while we filmed the song 🙂