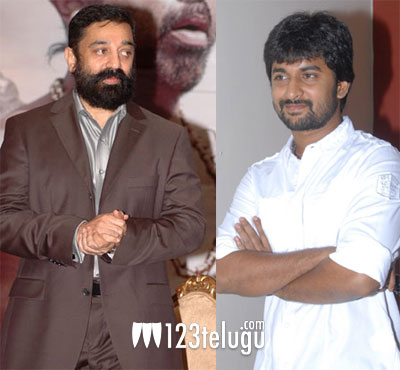 Rising hero Nani is very fond of an actor. In fact, Nani says that this particular hero is the inspiration behind his decision to become an actor. Well, that hero is none other than Universal Star Kamal Haasan. And Nani got to meet Kamal today in Chennai.

Kamal Haasan was shooting for Vishwaroopam 2 and Nani was working in the same area for the Tamil remake of ‘Band Bajaa Baraat’. Nani went over to Kamal Haasan’s set and was received quite warmly.

The young actor took to Twitter to express his happiness. He put out a series of tweets.

” As I said a lot of times earlier .. One man who’s an inspiration and reason for me to realise cinema is wer I belong .. Kamal sir :)”

“We are shooting in adjacent floors .. He for vishwaroopam and me for yash raj films .. And I was getting nervous in my own set ;)”

“Like a kid who wants to get a glimpse of his favourite movie star .. Thot will go meet him and take a pic and ask for an autograph”

“To my surprise what followed was a warm welcome..He knows me and has seen my work …Yahooooo..Couldn’t believe it.. He introduced me to his heroine and told her how my name has a different meaning in tamil when its just a pet name in Telugu”