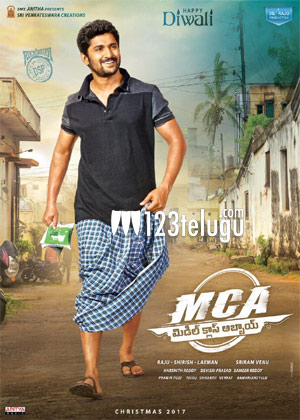 The first look of Nani’s ongoing film, Middle Class Abbayi, was unveiled yesterday and Nani’s pucca middle class look in the poster has left everyone impressed. According to the latest updates from the film’s makers, the entire shooting formalities, except for a couple of songs, will be wrapped up by November first week.

Middle Class Abbayi’s producer Dil Raju has confirmed that the film will be releasing as a Christmas treat. MCA is scheduled to hit the screens on December 21st. Sai Pallavi is the leading lady in this romantic family drama and Bhumika will be seen in a crucial role. Sriram Venu is the film’s director and DSP is the music composer.