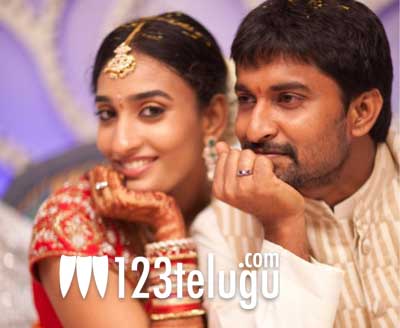 Tollywood heartthrob Nani is going to get married to his fiance Anjana Yelavarthy on October 27. The duo had got engaged on August 12 earlier this year and there were rumours that they might tie the knot in November; however, we have received a confirmation that the wedding is going to happen tomorrow itself. The who’s who from Telugu film industry are expected to grace the wedding ceremony to bless the couple. Nani and Anjana have known each other for more than five years before Nani went public about their relationship. Meanwhile, Nani’s upcoming film Yeto Vellipoyindhi Manasu is expected to release either in the last week of November or early December. He’ll also be seen in Krishna Vamsi’s upcoming political drama and Samuthirakani’s Jenda Pai Kapiraju. 2012 is turning out to be an extremely lucky and eventful year for this rising star in Telugu cinema.