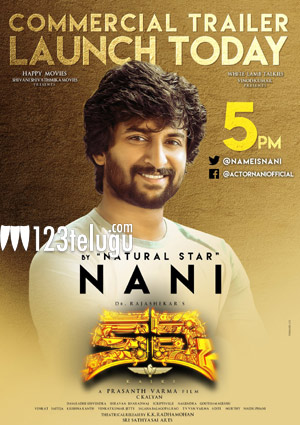 After raising expectations with the stunning teaser a couple of weeks ago, the makers of senior hero Rajashekar’s upcoming investigative thriller, Kalki, are all set to unveil the film’s theatrical trailer this evening. Hero Nani will be releasing the trailer at 5 PM today.

Interestingly, Kalki’s team is promoting the trailer as a ‘commercial trailer’, and we will know what they actually mean this evening. Already, the trailer has been attached to the theatrical prints of Mahesh Babu’s just released film, Maharshi.

Kalki’s entire shooting formalities have been wrapped up. The film is set in the 1980s and is inspired by real incidents. Awe fame Prasanth Varma is directing the movie. Adah Sharma, Nanditha Swetha, Poojitha Ponnada and Scarlett Mellish Wilson are the film’s leading ladies. C Kalyan is producing the film and Rajashekar’s daughters are presenting it.