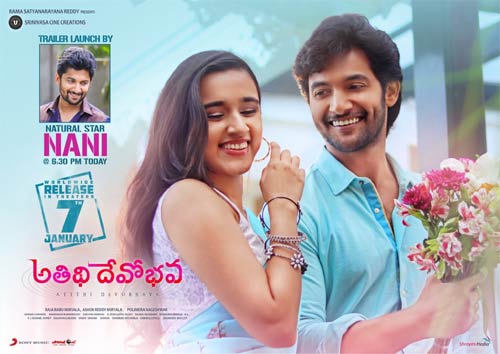 As we reported earlier, the pre-release event of Aadi Sai Kumar and Nuveksha-starrer Atithi Devo Bhava is scheduled to happen this evening in Park Hyatt, Hyderabad from 6 PM onwards.

Meanwhile, the makers have also noted that the trailer will also be released at the pre-release event. Now, the latest news is that the Natural Star, Nani, is going to launch the theatrical trailer of the romantic thriller at 06:30 PM today.

Directed by Polimera Nageshwar, the movie is all set to release in theaters on January 7, 2022. Produced by Ashok Reddy Miryala and Raja Babu Miryala, the movie has Shekar Chandra’s music.