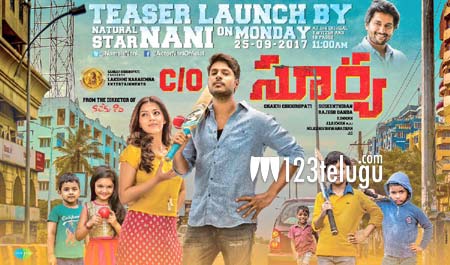 Hero Sundeep Kishan is currently busy shooting for a handful of movies in Telugu and Tamil. The actor’s Tamil-Telugu bilingual, Nenjil Thunivirundhal, is releasing in Telugu as C/O Surya. The film has been waiting for the right release date since a long time.

As per the latest updates, this intense social drama’s teaser will be unveiled by hero Nani on the 25th September at 11 am. C/O Surya will be hitting the screens during the upcoming Diwali festive season. The film is directed by national award winning Tamil director Suseenthiran.

Mehreen Pirzada is the heroine and D Imman is the film’s music director. Chakri Chigurupati, who had produced Nikhil’s Swamy Ra Ra, is releasing the movie in Telugu.