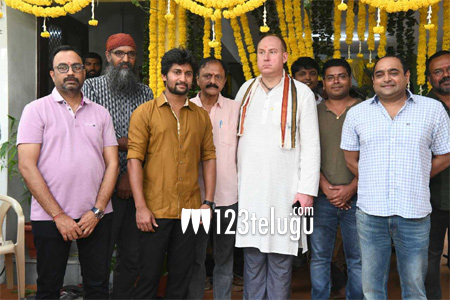 The announcement for Nani’s 24th project was made in December last year. Acclaimed filmmaker Vikram Kumar will be directing this film and leading production house Mythri Movie Makers will be bankrolling it. The film had its muhurtham ceremony this morning and the regular shooting will kick-start soon.

Nani24 is touted to be a romantic entertainer with a unique concept like all other Vikram Kumar films. Nani will reportedly don three different looks – an adolescent, a middle-aged man and an old man – in the movie. RX100 hero Kartikeya is said to be playing the main antagonist’s role in the film.

Multiple heroines are expected to feature in this as-yet-untitled film and an official announcement will be made soon. Legendary cinematographer PC Sreeram will be cranking the camera for the film. Stay tuned for further details.