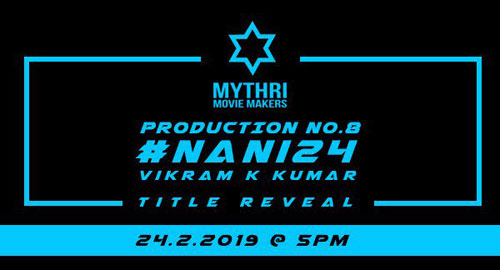 The shooting for hero Nani and acclaimed director Vikram Kumar’s film is currently underway in Hyderabad. The film is being produced by noted production house, Mythri Movie Makers. Mollywood actress Priya Arulmohan is going to make her Tollywood debut with this film.

As per the latest update, the title for Nani24 will be unveiled tomorrow at 5 PM, to coincide with the actor’s birthday. There has been a buzz that the film has been titled Gang Leader. For the first time, Vikram Kumar is coming up with an out-and-out entertainer.