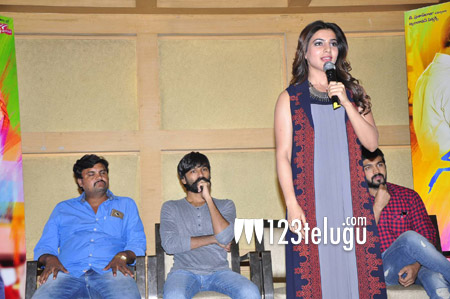 Star actress Samantha has surprised every one with girl next door looks in her upcoming film Nava Manmadhudu. She plays a very crucial role in this family entertainer and was here in Hyderabad today to promote the film along with hero Dhanush.

Speaking about her role, Samantha said that it was quite a challenge to work with National Award winner Dhanush. Samantha also added that it was like going back to acting school as she took utmost care of every expression for her character which demanded a lot from her.

Samantha has been working in more Tamil films off late and has some very interesting characters lined up. Nava Manmadhudu has some huge stars like Radhika and K S Ravikumar. Anirudh Ravi Chander’s music been received quite well and the film is set for a huge release this Friday.