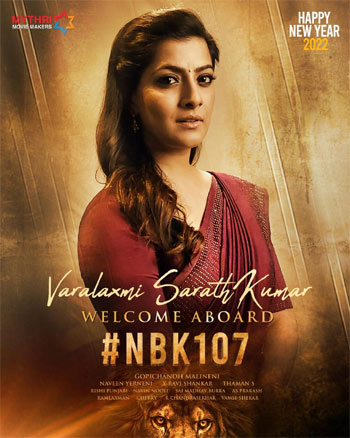 Nandamuri Balakrishna, who scored a blockbuster with Akhanda in 2021, has joined hands with the young and talented director, Gopichand Malineni for his upcoming project.

Now, the makers have announced that the powerful performer Varalaxmi Sarathkumar is playing a prominent role in this movie.

NBK 107 is her second film with the director, Gopichand Malineni. To recall, she impressed audiences in a powerful role in Ravi Teja’s Krack.

Billed to be a mass entertainer the movie also has Kannada actor Duniya Vijay as an antagonist.

Bankrolled by the renowned production house, Mythri Movie Makers, the movie has the sizzling beauty, Shruti Haasan as the leading lady. Besides, Thaman S is roped to score music for this mass entertainer.

To note, the actress has recently joined the sets of Samantha’s Yashoda.