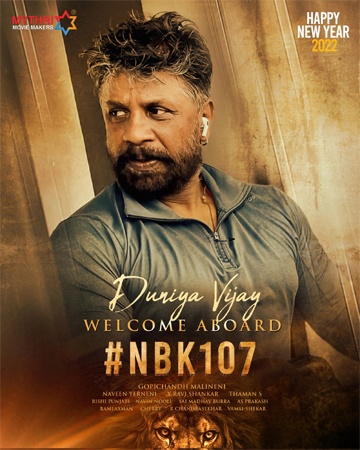 Nandamuri Balakrishna, who is currently enjoying the success of his latest film, Akhanda, is now ready to join the sets of his next with the talented director, Gopichand Malineni.

Mythri Movie makers, who is bankrolling the crazy project, has officially announced that the popular Kannada actor, Duniya Vijay, comes on board to lock horns with Balayya. This is the debut Telugu film of the Kannada actor.

Billed to be a mass and commercial film, the movie has Shruthi Haasan as the love interest of the actor.

Thaman S, who is on a success spree, is composing the music for this action entertainer whereas Rishi Punjabi is taking care of the cinematography. The regular shoot of the movie will begin this month.