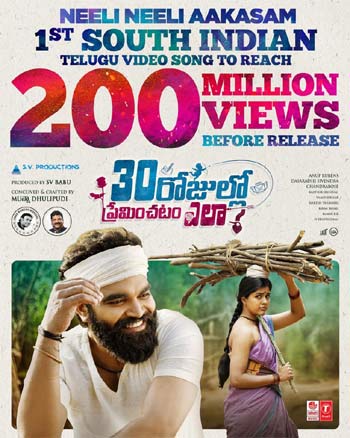 The Neeli Neeli Aakasam song from anchor turned hero Pradeep’s debut film, 30 Rojullo Preminchatam Ela, has been a massive chartbuster ever since it was released earlier this year. This Anup Rubens’ musical was crooned by Sid Sriram and Sunitha and penned by popular lyricist Chandrabose.

Neeli Neeli Aakasam’s video song has pulled off an unprecedented feat by clocking over 200 million views with over 1 million likes on YouTube. It’s the first ever south Indian film song to amass more than 200 million views before the release. The song talks about love and music lovers have given it a thumping response.

Bigil actress Amritha Aiyer will be seen as the female lead in this Munna directorial. Contrary to the reports, the makers will not be releasing the film directly on OTT, as they are determined to go for a theatrical release.