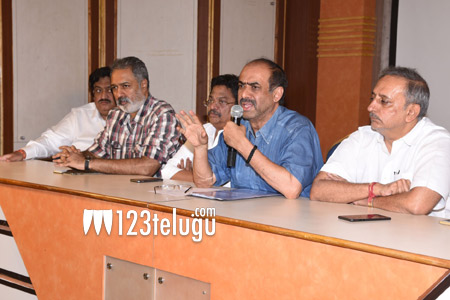 A day after it was widely reported that theatres across AP and Telangana, and also Tamil Nadu, are not going to screen any new films from March 2 onwards, key members from the Joint Action Committee addressed the media in Hyderabad. Suresh Babu, who has been spearheading the committee, clarified that Telugu films are not going to be screened in theatres; however, Hindi and English films will continue to be screened as per the schedule.

“Currently, our discussions with DSPs (UFO, Qube and others) are still going on. We have been negotiating with them on different issues and the most important of them all begin a plan of action to remove VPF eventually, playing trailers of films in theatres among other things. While the DSPs have agreed to our requests about playing movie trailers, we are still negotiating about VPF charges. Although they agreed to slash down the price, it’s still not at the level where all the producers and distributors would benefit. As a result, we have decided to stop new movie releases from March 2 and if the negotiations end on a positive note, then films will be screened as per the plan,” Suresh Babu said.

When asked why the JAC chose to call for a strike, of sorts, in the month of March, Suresh Babu said, “We have to ensure that the industry doesn’t suffer major losses due to a strike and that’s the reason why we chose this time period. There are fears that the industry might lose out on revenue in the meantime, but what we gain from this effort will be much more valuable in future,” he opined. The JAC, which also includes Gemini Kiran, C Kalyan, KL Damodhar Prasad among others, also added that all the four Southern film industries are facing similar issues with DSPs and hoped that the issues will be sorted out soon.