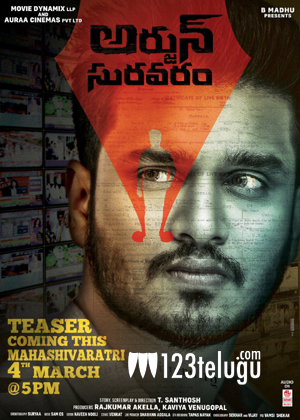 Nikhil and Lavanya Tripathi’s ongoing action thriller, Arjun Suravaram, is slated for release on March 29. The film is an official remake of the hit Tamil thriller, Kanithan, and it is being directed by TN Santhosh, who had helmed the Tamil original.

Meanwhile, the stage is all set for the grand launch of Arjun Suravaram’s teaser, which will be out on March 4 at 5 PM as a Maha Shivaratri special. In the film, Nikhil essays the role of an investigative journalist. The film is being produced under Auraa Cinemas and Movie Dynamix banners. Tagore Madhu is presenting it.