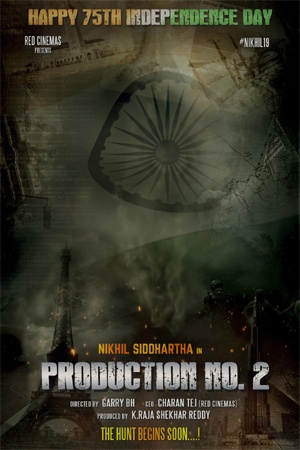 Hero Nikhil Siddhartha’s 19th film has been announced on the occasion of India’s 75th Independence Day. For the first time, Nikhil will be acting in an action spy thriller which marks the directorial debut of noted film editor Garry BH of Goodachari, Evaru and HIT fame. Nikhil is quite excited about doing a full-fledged action-packed spy thriller for the first time in his career.

This as-yet-untitled film will be produced by K Raja Shekhar Reddy under Red Cinemas banner, which has Charan Tej as its CEO. The announcement poster features the Indian tricolor, soldiers at the border and a few popular foreign locations, indicating that the story has a huge span and the film will be produced on a huge scale. More details about the project will be revealed soon.