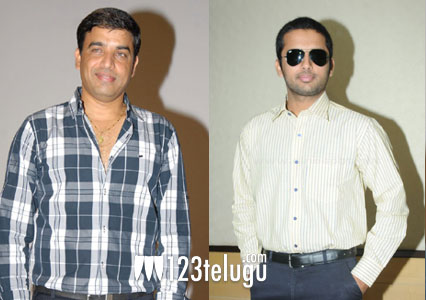 If the latest news doing the rounds in Filmnagar is to be believed, young hero Nithiin and producer Dil Raju will be teaming up for a new project. The film has reportedly been titled ‘Kalasi Unte Kaladhu Sukham’. We have heard that the film will be a family entertainer with a good dose of comedy and romance. There has been no official announcement about the project so far.

Nithiin is on a comeback mode and his new look and style have clicked well with youngsters. He is currently busy with the shooting of ‘Courier Boy Kalyan’. He is also gearing up for a new project with Puri Jagan.

Dil Raju is busy with the production of ‘Ramayya Vasthavayya’. His film ‘Yevadu’ is set for release in August.

We will bring you more details about Nithiin and Dil Raju’s project once we have an official confirmation.