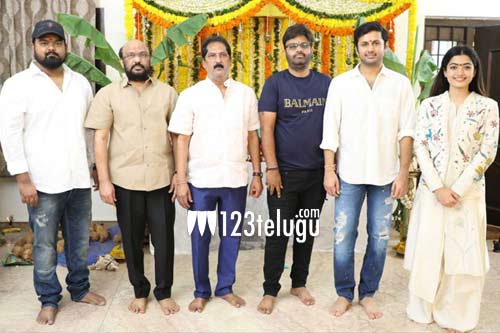 Finally, after being in the news since last year, hero Nithiin and happening young actress Rashmika’s much-talked-about film, Bheeshma, had its muhurtham ceremony this morning. The film’s core cast and crew members were present at the event.

Bheeshma is a romantic entertainer loaded with romance and fun elements. The film’s regular shooting will be commencing from the 20th of this month. The makers have announced that Bheeshma will be hitting screens in December.

Chalo fame Venky Kudumula will be directing Bheeshma and Suryadevara Naga Vamsi will bankroll it under Sithara Entertainments banner. Mahati Swara Sagar will score the music.