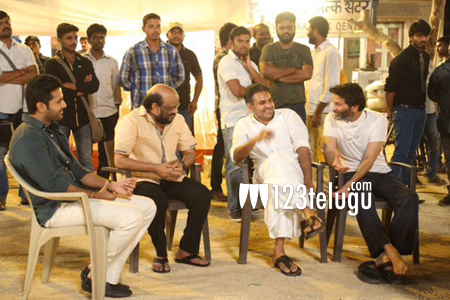 That actor Nithiin is a diehard fan of Power Star Pawan Kalyan is a well known fact. To pay his tribute, the actor keeps on using Pawan’s references in some way or the other in each of his films. And yesterday, the handsome actor had a surprise guest on the sets of his upcoming film. A..Aa.

Last night, Nithiin took to his Twitter profile to post a picture of none other than his favorite idol, Pawan Kalyan, who paid a surprise visit to A..Aa sets. Pawan is also a close friend of the film’s director Trivikram Srinivas and he spent some quality time interacting with the film’s core unit.

A thrilled Nithiin tweeted, “POWERFUL guest on our sets last nite!!was very nervous excited n happy to perform in front of him”. Meanwhile, A..Aa is in the last leg of its shooting and the film’s audio album will be launched on the 26th of this month.

POWERFUL guest on our sets last nite!!was very nervous excited n happy to perform in front of him????? pic.twitter.com/PQG7C0SBlz