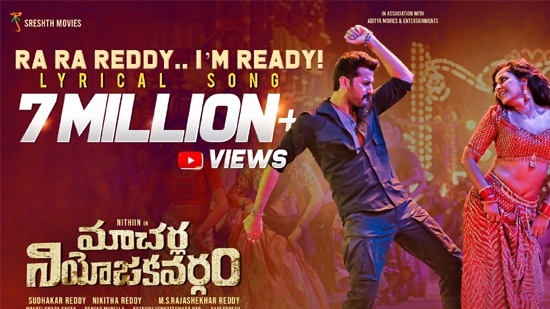 The mass number of Nithiin’s ‘Ra Ra Reddy…I am Ready’ featuring actress Anjali Macherla Niyojakavargam was released yesterday. The song created a good buzz since the announcement as Anjali is doing a special number after Sarrainodu.

From the time the song got released, it has been setting Youtube on fire. It has clocked in 7 Million real-time views till now and is trending at the top in the Music category. Mahati Swara Sagar’s excellent composition is backed by a powerful rendition from Lipsika. Kasarla Shyam’s lyrics added more spice to the song.

The small surprise factor in the song made it even more special. Bankrolled by Sudhakar Reddy and Nikitha Reddy, debutant director M.S. Raja Shekar Reddy is helming this project. Catherine Tresa and Krithi Shetty are playing the female leads. The film will hit the screens on August 12th.