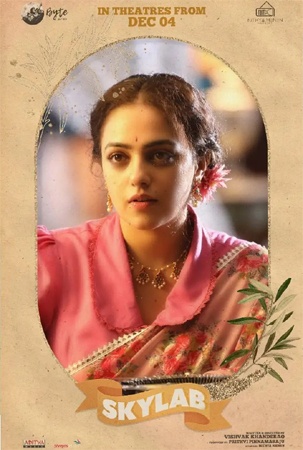 The recently released theatrical trailer for talented actors Nithya Menen, Sathya Dev and Rahul Ramakrishna’s upcoming sci-fi rural entertainer, Skylab, is raising the curiosity levels on the movie. And just a while ago, Skylab’s team officially announced that the film is going to hit the silver screens on December 4.

Skylab is a period film set in Banda Lingapally village in Karimnagar. The film’s story is based on the famous yesteryear legend of the doomed NASA space station ‘Skylab’ which was feared to have disintegrated and the its debris would hit earth. The film is directed by debutant Vishvak Khanderao and produced by Prudhvi Pinnamaraju under Byte Features banner. Nithya Menen has co-produced the movie under Nithya Menen Company.