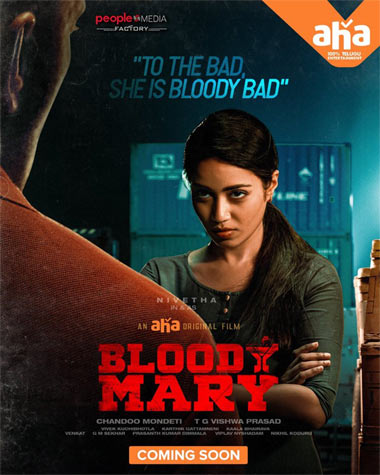 Actress Nivetha Pethuraj, who is well known for the films like Mental Madhilo and Brochevarevarura, is now making her OTT debut with a Telugu movie. Leading Telugu OTT platform, Aha has announced a web original titled, Bloody Mary.

Director Chandu Mondeti of Premam fame is also making his OTT debut with this crime thriller. It is heard that Nivetha is playing the character Mary, a blind woman, who overcomes the disability to protect her beloved people.

Brahmaji, Ajay, Kireeti, Rajkumar Kasiredy, and others are roped in to play key roles in web film, which has Kaala Bhairava’s music and Karthik Gattamaneni’s cinematography. Aha will release the teaser and announce the release date of the suspense thriller, Bloody Mary, very soon.