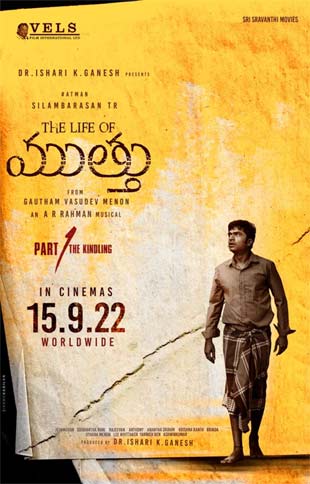 Kollywood actor Silambarasan TR simply known as Simbu will be seen next in Vendhu Thanindhathu Kaadu. Directed by the star director Gautham Vasudev Menon, the biggie will be released on September 15, 2022.

An interesting update about the movie is out today. Sri Sravanthi iMovies, well known for producing films like Nuvve Kavali, Nuvvu Naku Nachav, and Nenu Sailaja, is releasing the Telugu version of the movie. The Telugu-dubbed version of the film is titled The Life Of Muthu. The first look poster of the movie has also been released today.

The Life Of Muthu, scheduled to release on the same day, also has Siddhi Idnani, Radhika Sarathkumar, Siddique, Neeraj Madhav, Aangelina Abraham and others in prominent roles. Having AR Rahman’s music, the film is produced by Dr Ishari K Ganesh under the VELS Film International Limited.