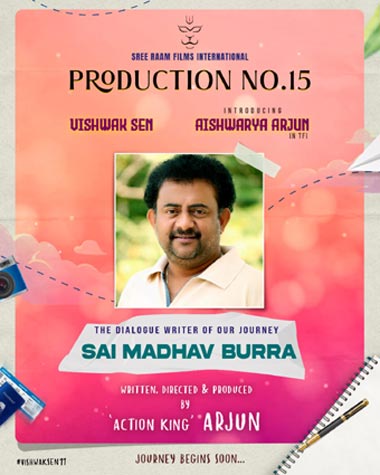 We have already reported that the action king Arjun Sarja has announced his next directorial with the Tollywood young hero Vishwak Sen. The movie has Arjun’s daughter Aishwarya Arjun as the leading lady.

Now, the makers have announced that the noted writer Sai Madhav Burra comes on board for the yet-to-be-titled film as the dialogue writer. To note, Arjun penned the story for this movie besides wielding the megaphone.

The movie, which is being produced by Arjun under his home banner Sree Raam Films International, also has Jagapathi Babu in a crucial role. More details about the movie will be announced in the coming days.