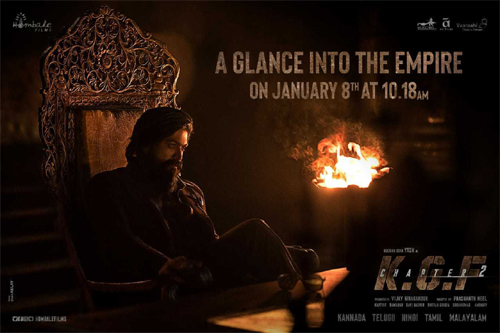 Finally, the makers of Sandalwood star Yash and star director Prashanth Neel’s highly-anticipated pan-India gangster drama, KGF Chapter 2, have come up with an official announcement regarding the film’s teaser. The much-awaited teaser will be out on January 8 at 10:18 AM as Yash’s birthday treat.

While the first look poster gave a glimpse of Yash as Rocky Bhai ‘rebuilding the empire’, the teaser will offer a glance into the empire. Needless to say, expectations among fans and industry circles are humongous on this intense period action drama.

Vijay Kiragandur is bankrolling this magnum opus under Hombale Films banner. Sanjay Dutt, Raveena Tandon, Srinidhi Shetty and Prakash Raj will be seen in lead roles in the movie. Ravi Barsur has composed the music.