Official: Nani to romance acclaimed Malayalam actress in his next
Published on Nov 13, 2020 10:43 am IST 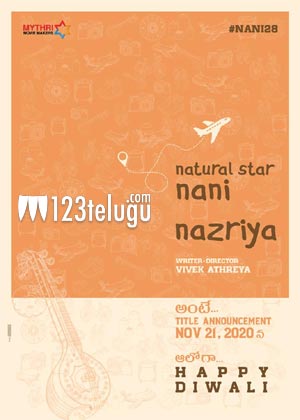 Here comes the official announcement on hero Nani’s 28th project. The film will be produced under leading production house Mythri Movie Makers and it will be directed by Vivek Athreya of Mental Madhilo and Brochevarevarura fame.

Interestingly the makers have roped in acclaimed Mollywood actress Nazriya Fahadh as the female lead in this as-yet-untitled film. The film marks Nazriya’s debut in Tollywood. She has a decent fan base among Telugu movie lovers for her movies such as Bangalore Days and Trance.

Touted as a romantic musical, the film’s title will be announced on November 21. The regular shoot will commence early next year. More details about this exciting project’s cast and crew will be out in the coming days.