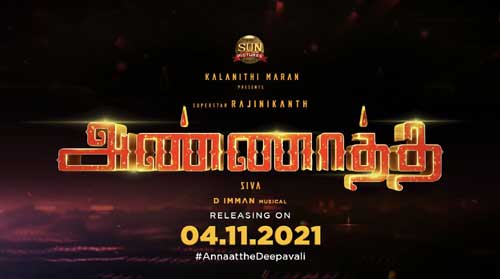 Here’s the much-awaited announcement on the release date of Super Star Rajinikanth’s high budget family entertainer, Annaatthe. The makers at Sun Pictures have just announced that the film will be opening in cinemas on November 4, as a Deepavali festive treat.

Annaatthe had entered its final phase of shoot last month. However, the COVID-19 scare and Rajini’s hospitalization had delayed the schedule to summer. Nayanthara and Keerthy Suresh are the leading ladies in this Siva directorial. Deepavali is a favourite festival for the Tamil film trade, and fans are hoping that the Rajini-starrer will literally bring the fireworks in cinemas.