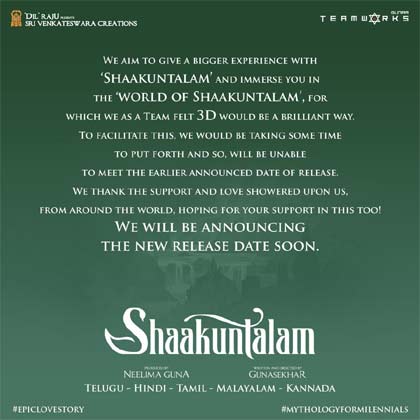 A few days back it was announced that Samantha’s PAN Indian film Shaakuntalam will be making its way to the silver screens on November 4th. But here is some disappointing news for all the actress’ fans. The film won’t be released on the said date as per the latest update.

Going into the details, the team wanted to release the film in the 3D format which they think would be the best way to present Shaakuntalam to the audience. As the 3D works are demanding more time, the team decided to postpone the film.

The new date will be announced very soon, stated the makers. Shaakuntalam is directed by Gunasekhar and produced by Neelima Guna under Gunaa Teamworks. Mani Sharma is providing the music while Dev Mohan plays king Dushyant.