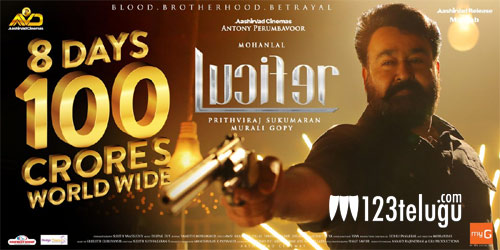 Malayalam star, Mohanlal’s intense political drama, Lucifer has been rocking the box-offices worldwide. The film is continuing its dream run not only in Kerala but also in the US.

As per the latest reports, Lucifer has crossed 100 gross in just 8 days and stands second for Mohanlal after Pulimurugan. Incidentally, Mohanlal is the only Malayalam hero to have two 100 crores till date.

Malayalam hero Prithviraj has directed Lucifer and is all set to hit Telugu screens on April 12th.