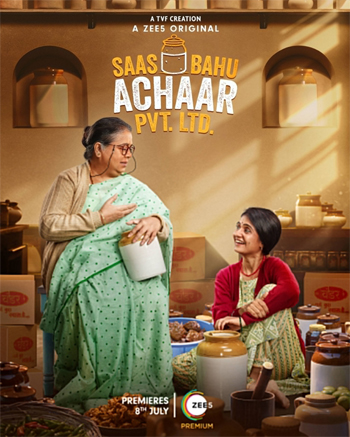 OTT platform ZEE5 is currently partnering with ‘The Viral Fever’ to stream new shows and upcoming seasons of titles from TVF’s library. TVF is known for its shows like Pitchers, Tripling, Kota Factory, Gullak, Panchayat, Aspirants and others. Recently they made an announcement regarding their first original together, titled Saas Bahu Achaar Pvt. Ltd.

The makers announced that the series will be available to stream from July 8th on ZEE5. The story is based in Old Delhi and it revolves around Suman who constantly struggles to start a pickle business.

The show stars Amruta Subash, Anup Soni, and Yamini Das in lead roles. It is written by Abhishek Srivastava and Swarnadeep Biswas and directed by Apoorv Singh Karki.