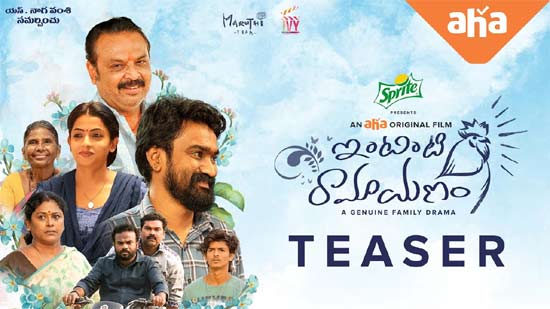 A few days ago, Aha announced a web movie called Intinti Ramayanam. Having Rahul Ramakrishna in the lead role, the movie’s teaser has been out now.

The teaser looks cool and funny. The makers haven’t revealed much about the story but indicate that the family of Naresh has persons with different characteristics. We need to wait for the trailer to get more information about the web movie. Aha also announced that Intinti Ramayanam will be premiered on its platform on December 16, 2022.

Suresh Naredla makes his debut as a director. Producer Naga Vamsi and Aha jointly presented this movie whereas Maruthi and IVY Productions produced this village drama, which has Naresh, Navya Swamy, Gangavva, Bithiri Sathi and others in pivotal roles. Kalyan Malik provided the music for this web film.