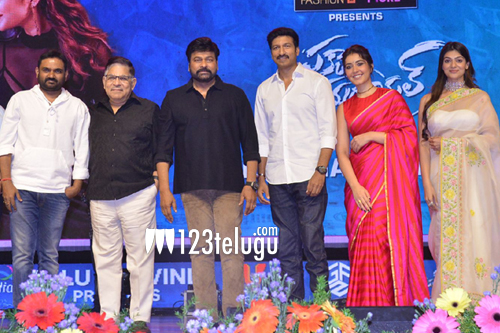 Tollywood actor Gopichand and Raashii Khanna starrer Pakka Commercial is up for a grand theatrical release on coming Friday. Ahead of that the makers have held a grand pre-release event tonight in Hyderabad.

During the event, Chiranjeevi, who graced the event as the chief guest, said that he is junior to Gopichand’s father T. Krishna garu in college. He remembered his college days and said his association with him. Talking about Gopichand, Chiru said that he like Sahasam, Okkadunnadu and Chanakya movies. Gopichand is a pakka mass hero with solid cutout, stated the Acharya actor.

Chiranjeevi commented that he knew Maruthi since the inception of the Parjarajyam party and remembered how he encouraged Maruthi to become a director. He said that Maruthi knows the public pulse and that’s why his movies with humour and sentiment worked out well.

Chiranjeevi wished the entire team and appreciated Vicky of UV Creations, Bunny Vas, and others behind Pakka Commercial. He said that Pakka Commercial will entertain everybody for sure. He thanked the audience for coming and making the event a grand hit