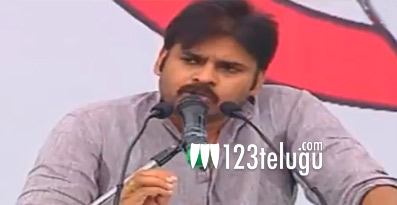 Numero uno actor and Jana Sena party leader Pawan Kalyan vowed to fight for special status to Andhra Pradesh. The actor addressed thousands of his fans and Jana Sena activists this evening at the Indira stadium in Tirupati.

In his fiery speech that was full of angst and anguish against the centre, Pawan said that he may stumble in his political journey, but he will never run away from facing consequences. Expressing his grief over tragic death of his Vinodh Royal, Pawan pleaded his fans to end all the clashes with other star’s fans.