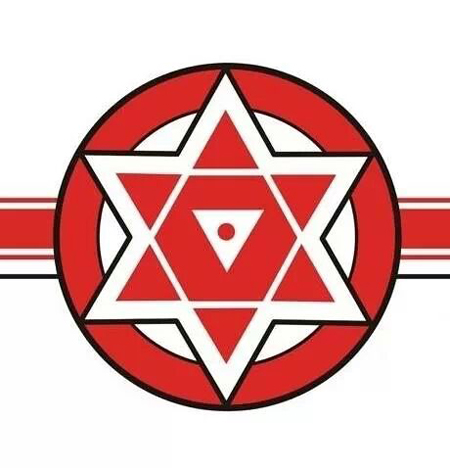 The Party Emblem is a combination forces that define our nation’s life and struggle.

The white background on which it stands signifies the peace and stability of several thousands of years of Indian civilisation and culture.

The Emblem itself is in the colour red, which signifies revolution. A deep and true change from within, yet the story of that change is told on the stable background of our ancient nation.

The star in the Emblem is a six pointed star that signifies the 6 ideals of our party. The six ideals are mixed with our blood as we are sons and daughters of those ideals handed down to us from several generations. The white in the star signifies self-luminosity which shines on its own because ideals are lights unto our path.

The dot in the centre

The dot in the centre represents the soul of every being. The soul is our true reality, our ultimate truth. The soul at the centre is also at the heart of everything we do as individuals and as a nation.

The black lining on the emblem symbolises the balance between revolutionary zeal and its opposing forces to avoid one-sidedness and discordance. It represents the harmony of the opposites.