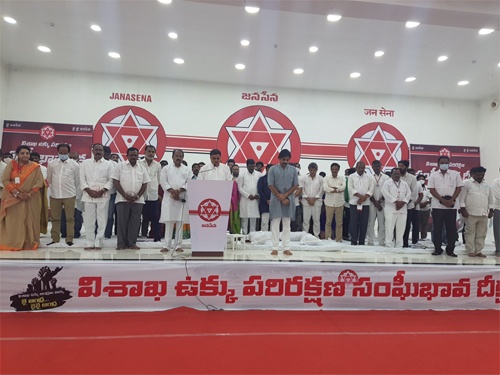 Film star and Janasena Party President Pawan Kalyan has taken a small break from shootings for his one-day political activism. In support of the protesting Vizag Steel Plant employees, Pawan will be sitting on a hunger strike from 10 AM to 5 PM today (Dec 12) at Janasena Party office in Mangalagiri.

For the last 300 days, the steel plant employees have been protesting against the Narendra Modi-led BJP government’s decision to privatise the iconic steel plant. In October, Pawan, who has aligned with the BJP, took part in a massive protest meet at Vizag Steel Plant and took potshots at Andhra Pradesh Chief Minister YS Jagan Mohan Reddy for not trying to resolve the steel plant employees’ issues.

Thousands of fans and Janasena Party activists and top leaders will join Pawan in his hunger strike to save the future of the steel plant and its employees.