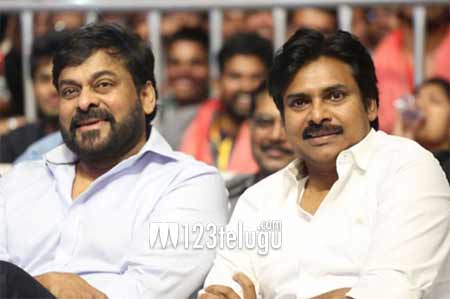 Earlier today, the motion poster of Chiranjeevi’s ambitious project, Sye Raa was launched in a grand way as most of the mega clan was there at the event. Chiru himself was missing from the event which disappointed fans a bit.

Meanwhile, sources close to us reveal that Powe star Pawan Kalyan was the first one in the family to wish Chiru. The star hero specially arrived at Chiru’s residence early in the morning and spent some good time with his brother.

Time and again, both Chiru and Pawan have been taking time for each other in their busy schedules. Pawan is shooting for his new film in the direction of Trivikram where as Chiru is busy prepping for his next.