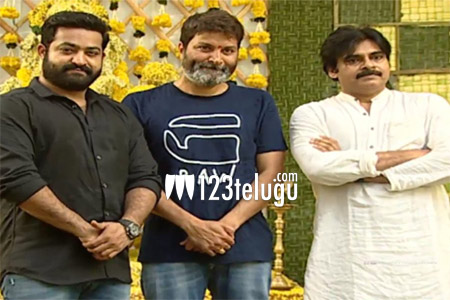 It’s quite rare to see two top league stars of Tollywood come together on a public platform. That rare event happened this morning at the inaugural ceremony of NTR’s 28th film in Trivikram’s direction. Power Star Pawan Kalyan was the chief guest at the event and he kick-started the formalities by sounding the first clap for the movie.

However, it was the affectionate camaraderie that was shared by both Pawan and NTR which was the main highlight of the event. Both the star heroes were in their element and spoke at length and hugged each other. Needless to say that it was a treat for the onlookers at the event and fans of both the stars who were catching up with all the action on YouTube seeing their favorite stars setting a positive trend.

NTR28 will be produced by S Radhakrishna under his Haarika & Haasine Creations banner. Anirudh Ravichander will score the film’s music.