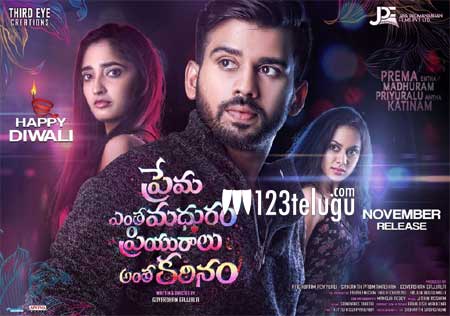 Prema Entha Madhuram Priyuralu Antha Katinam, an emotional romantic thriller, was supposed to release in September, but postponed due to heavy competition. Now, the latest we hear is that the makers are planning to release the film in November.

The film’s first look teaser, which was released a few months back, is getting a positive feedback from the moviegoers and raised decent expectations on the film. Young filmmaker Goverdhan Gajjala has directed this film, which was entirely shot in the US.

Debutants Chandrakanth, Radhika Mehrotra, and Pallavi Dora are the main leads in this film. Raghuram Royyuru and Goverdhan have jointly produced PEMPAK, which has its music composed by Jitin Roshan.