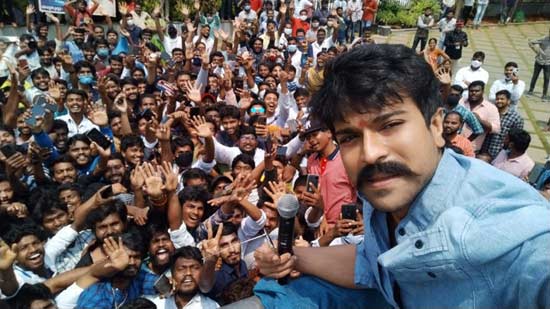 Star hero Ram Charan celebrates his birthday tomorrow and his fans have already begun the celebrations. This morning, hundreds of fans headed to Charan’s palatial bungalow in Jubilee Hills and wished him on his special day. Deeply touched by their gesture, Charan thanked them and spent some time interacting with them.

During the interaction, Charan also revealed that a special poster revealing his Siddha character from his father Megastar Chiranjeevi’s Acharya will be out tomorrow. Meanwhile, Ram Charan’s Alluri Sitharamaraju look will be unveiled by RRR makers this evening at 4 PM.