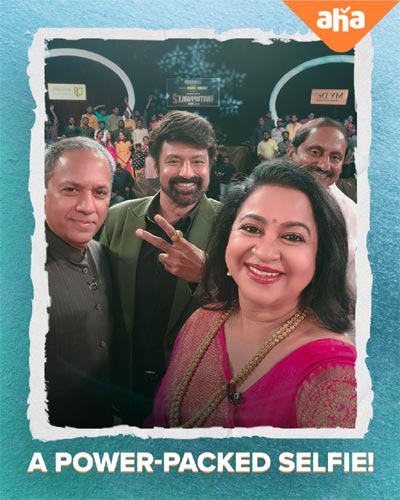 Balakrishna’s Unstoppable season 2 started with a bang as the first episode saw the political leader Chandrababu Naidu revealing some unknown details. The political and personal side of the former CM helped the show big time. Then the show was graced by a few young actors like Sharwanand, Siddhu, Vishwak Sen, etc.

The fourth episode will be attended by politicians Kiran Kumar Reddy and Suresh Reddy. Surprisingly actress Radhika Sarathkumar will also grace this episode, and it will be interesting to see the mix between the entertainment and political field.

The shoot of the same was wrapped up, and the OTT platform released a cool picture where Radhika was seen taking selfie with Balayya, Kiran Kumar Reddy, and Suresh Reddy. All have bright smiles on their faces, and the photo is making waves on the internet.