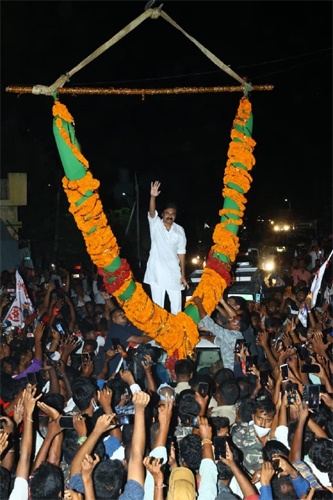 It is known that JanaSena chief Pawan Kalyan toured parts of Kakinada the other day and took part in the ‘Srama Dhanam’ initiative organised by JanaSena troops.

Here is an interesting snap from the event that is going viral on social media now. In this snap, Pawan Kalyan striking a pose as he greets his party troops. We also see a massive garland that was specially prepared for Pawan. Reacting to the photo, Pawan’s fans are terming it as a ‘Oora Mass’ snap and understandably so.

On the work front, Pawan Kalyan is currently busy with Bheemla Nayak. He will soon be resuming Hari Hara Veera Mallu.