Actress Pooja Hegde, who has crazy projects in her kitty, conducted a special Q& A session on Instagram last night as her hit movie, Ala Vaikunthapurrramloo, clocked 2 years.

During the session, one of her followers asked, “Which was the scene that you had the most fun shooting?”

Pooja said that it was a fun scene in the office with Allu Arjun, Nivetha Thomas and Sushanth. Unfortunately, the scene was never released in either theatrical or OTT versions, said the actress. 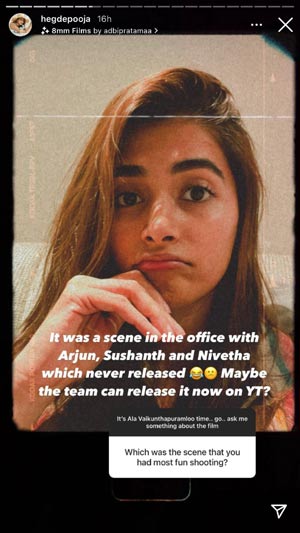