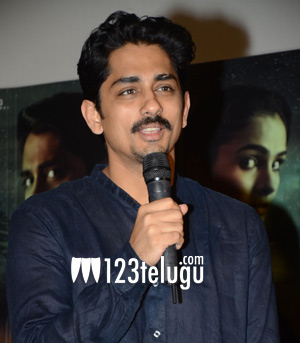 It’s been reported earlier that young hero Sundeep Kishan is making his debut as a producer with a horror thriller titled Ninu Veedani Needanu Nene. Being directed by Carthick Raju, the film is nearing completion and it’s gearing up to hit screens this summer.

And here is an interesting update. Popular hero Siddharth, who’s also an accomplished singer, has crooned a song in Ninu Veedani Needanu Nene. The song was recorded on Monday. It’s almost after 5 years that Siddharth has sung a Telugu song.

In the past, Siddharth crooned several chartbuster songs in his movies such as Bommarillu, Oy! and Oh My Friend etc.