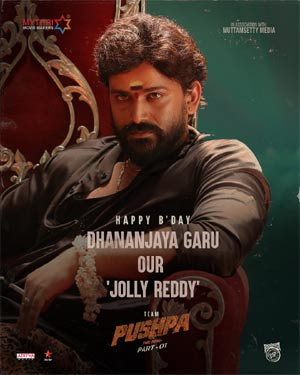 The cast of Allu Arjun and Sukumar’s highly-anticipated pan-India action drama, Pushpa, has just got bigger. The film’s makers announced this evening that talented Sandalwood actor ‘Daali’ Dhananjaya has been roped in for a key role in the movie.

Pushpa’s team has also unveiled a striking first look poster featuring Dhananjaya, as he celebrates his birthday today. He plays Jolly Reddy in this intense rural drama, and more details about his character will be out at an appropriate time. Dhananjaya made his Tollywood debut with Ram Gopal Varma’s Bhairavageetha in 2018.